The first Rolex Milgauss 6541
Milgauss is Rolex's professional antimagnetic watch. Rolex Milgauss was first born in 1954, the first generation of Milgauss, number 6541. Although Milgauss is relatively a niche watch in sports, but the beginning is not small. Rolex was developed together with the European Institute of Particle Physics (the European Institute of Particle Physics is the research unit of the world's largest positron-electron collider), the purpose is to produce a suitable scientific researcher can work normally in the electromagnetic environment Worn watch. Rolex uses an anti-magnetic inner shell on the Milgauss. Between the movement and the bottom cover of the watch, a layer of anti-magnetic inner shell is added, so that the anti-magnetic ability of the watch reaches 1000 Gauss at the time, while the general anti-magnetic ability of the watch is only 70 to 90 Gauss. . The name Milgauss, mile means 1000, and gauss means magnetic field, which is combined to be anti-magnetic 1000 Gauss.
The first generation of Rolex Milgauss 6541 has several obvious characteristics. The first is the "lightning needle", that is, the second hand of the watch is made into a lightning shape. The second is the rotating bezel, because at the time Rolex launched the water ghost and other sports watches at the same time, all have rotating bezels, so the 6541 also used the rotating bezel, which is different from the Milgauss afterwards. The third is the honeycomb pattern decoration on the dial of Milgauss 6541.

Rolex second generation Milgauss 1019
The second generation of Rolex Milgauss is 1019. The second generation of Milgauss 1019 was launched in the early 1960s and became the successor to the 6541. Compared with the first-generation 6541, the second-generation 1019 has undergone tremendous changes in appearance. 1019 Removed the rotating bezel on the 6541 and used a polished bezel. 1019 no longer uses the lightning needle, but changes the second hand back to the conventional style. The time scale of 1019 was changed to a bar-shaped time scale, and the pointer was also changed to a long bar-shaped hour and minute hands. The Milgauss print on the dial of 1019 is changed to red. The appearance of 1019 is obviously different from that of the previous generation 6541. In general, 1019 is more inclined to the current Milgauss. 1019 began in the 1960s and was produced until the 1990s (also said in 1988). During such a long production process, there were slight changes in the dial time scales and other details (such as the position of the time scale luminous changes, from luminous The bar becomes a luminous spot, etc).

Rolex third generation Milgauss 116400
The third generation of Rolex Milgauss is 116400, which is the "lightning needle" currently on the market. Among them, the green glass used for the green and blue surfaces is commonly known as "green glass".
116400 was released in 2007, 1019 years away from the second generation, with a gap of nearly 20 years. When 116400 first came out, because the orange lightning needle and the green glass were very dazzling and unique, so the price was immediately high. Until a few years later, the normal market was slowly restored. 116400 continues to use polished bezel. At the same time, using the bar-shaped pointer and the long luminous hour markers, the lightning needle and the Milgauss letters on the disk are made orange. 116400 still uses anti-magnetic inner shell, and the movement is upgraded to 31XX series movement (3131). The Rolex 31XX series movement used in 116400 has a blue niobium balance spring. The movement itself has anti-magnetic ability. With the anti-magnetic inner shell, the actual anti-magnetic ability has already exceeded 1000 Gauss. Some foreign players have tested it, speculating that the actual anti-magnetic ability of 116400 can reach 7000 Gauss or even higher. 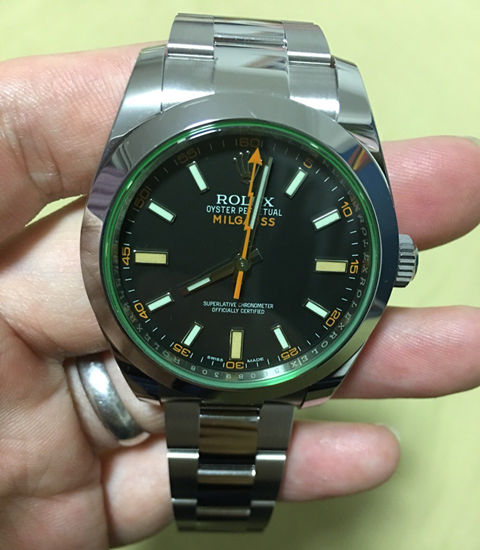 The Rolex Milgauss replica watch size is 40mm, which is very comfortable to wear. The classic green sapphire mirror is very gorgeous. The most recognizable is the orange lightning pointer. Needless to say, the one with the lightning pointer must be the MILGAUSS series. The stainless steel case of the watch is also polished and is very detailed, with a good gloss.
In fact, when you first see the Rolex Milgauss replica watch, you will feel that this is a big three-pin formal watch, everything is quite satisfactory. There is neither the enthusiasm and publicity of Submariner and GMT nor the iconic fangs of DATEJUST. The special hand of this watch is the lightning needle. Watch friends know that Rolex always likes to make a fuss on the hands of the watch. This can be seen from the explorer's Mercedes-Benz pointer and the yacht's triangular pointer. However, in the Rolex family, most watch fans have always thought that the most stylish is the MILGAUSS series "lightning" needle. As a strongman in the anti-magnetic watch camp, the MILGAUSS series of lightning needles are both suitable for the theme and logical. The lightning pointer is not only a model of anti-magnetic watches, but also a pioneer in the field of pointer aesthetics.
Rolex Milgauss Replica Watch By N factory Three-dimensional inlays, including other scales, have been finely polished by CNC and have a three-dimensional sense. Although the sapphire glass mirror is coated with green film, it is still very transparent. The scales and hands in the dial are covered with Super Luminova luminous powder coating. We all know that Rolex watches have a hidden anti-counterfeiting small crown at 6 o'clock on the table mirror, which can be seen by tilting the light at 45 degrees, but this green glass is one of the rare Rolex wrists without anti-counterfeiting crown table. Because its glass structure is different from other watches, it is different from other Rolex series. N Factory's most trusted online store Rolex Milgauss Replica.
The Rolex Milgauss replica watch adopts a 904L dissipative case, which has extremely strong anti-corrosion performance, and the waterproof depth is very powerful up to 100 meters. The grinding of the head gear is very round, and it is easy and smooth to twist. The crown logo engraved on the top is also delicate and in place. Its back uses a dense bottom design, in line with Rolex's consistent style. The Rolex logo and letters in four directions on the edge of the bottom cover are clear. The movement adopts the re-engraved 3131 movement, and the basic movement is the Seagull 2824. The strap is made of 904L stainless steel, the overall workmanship is smooth and translucent, and the combination of drawing technology and polishing technology. The Rolex logo is also perfectly presented on the buckle without any flaws. The buckle adopts the frosted process, the details are perfect, and it is matched with the original folding buckle. 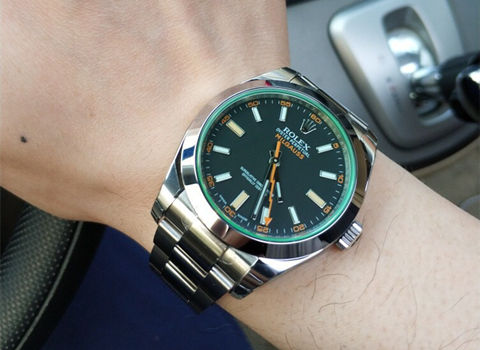